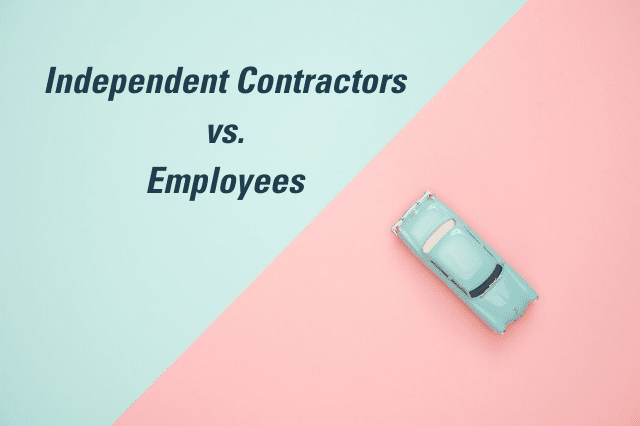 Since the introduction of virtual marketplace companies (VMC’s) like Uber, there has been some confusion about what is means to be an independent contractor vs. an employee. The important distinctions between these two worker classifications can seriously affect a worker’s wages and what taxes are paid by the worker or by the business. Get to know the difference between being an independent contractor and an employee to determine which is the right path for you.

What is an Independent Contractor?

Independent contractors go by many names, including “gig”, “on-demand”, or “sharing economy” workers. For tax purposes, these titles all fall under non-employee or independent contractor. These workers must pay self-employment tax, which includes the employee and employer halves of Social Security (FICA) and Medicare taxes. Their employer does not have to pay for:

What is an Employee?

Employees are hired to work in the service of a specific employer. The Internal Revenue Service (IRS) classifies a worker as an employee “if the organization can control what will be done and how it will be done” and automatically assumes that a worker is an employee unless that worker can be proven to be a non-employee (or independent contractor). Additionally, the business aspects of the job are controlled by the company, such as paying the worker and providing supplies. Employees also receive benefits like pension plans, health insurance, and vacation pay.

The misclassification of a worker as a self-employed contractor rather than an employee can lead to back taxes and penalties for businesses. In fact, nearly 70% of all federal tax revenue paid to the IRS is represented by federal employment withholding taxes. Both the Department of Labor (DOL) and similar state-level organizations help to ensure that workers are properly classified by their employers, yet improper employee classification still leads to dozens of class action lawsuits per year.

Both the DOL and National Labor Relations Board (NLRB) have released tests for VMC’s to determine whether their workers are employees or independent contractors. The tests include questions related to the VMC’s control over the workers, how easily the workers could look elsewhere from work, and whether the workers pay for the necessary equipment to perform their duties at the VMC. There are three main tests for determining worker classification: common law 20-factor test, IRS three-factor test, and preemptive federal statutory provisions.

Originally created by the IRS, the common law test uses 20 factors to evaluate the right of control and the validity of an independent contractor classification. The factors include: level of instruction, amount of training, degree of business integration, extent of personal services, control of assistants, continuity of relationship, flexibility of schedule, demands for full-time work, need for onsite services, sequence of work, requirements for reports, method of payment, payment of business or travel expenses, provision of tools and materials, investment in facilities, realization of profit or loss, work for multiple companies, availability to public, control over discharge, and right of termination.

The IRS’s three-factor test is newer than the 20-factor test, but the basis of the tests are similar. In the three-factor test, the IRS groups the 20-factor test into three broad categories based on the relationship of the worker and employer: behavioral control, financial control, and relationship control. Behavioral control focuses on the company’s right to control what the worker does and how the job is done, including employee training and evaluation systems. Financial control is based on the monetary aspect of a worker’s job, including being able to work for multiple employers or being reimbursed for travel costs. Relationship control includes factors like employee benefits and relationship permanency.

This test is administered during an investigation by the DOL or its state counterpart. The DOL often uses an “economic realities test” under the Fair Labor Standards Act (FLSA) and is more likely to find a worker to fall into employee status than the 20-factor test. The economic realities test includes six factors:

Which is Right for You?

There are many advantages to being an independent contractor, like being able to establish your own schedule and knowing exactly what work you will be performing as outlined in your contract. However, there are also disadvantages, including a greater tax burden, less job security, and a lack of fringe benefits. The same holds true with being an employee. While employees are allowed greater job security and are aided by their company in paying taxes, employees generally do not have the freedom to work their own hours, have less room for negotiation, and often over-extend their original job descriptions. Whichever path you choose, be sure that you know the tax implications involved in your decision.

Stay up to date on tax changes for independent contractors and employees. Become an Enrolled Agent today with Surgent EA Review.