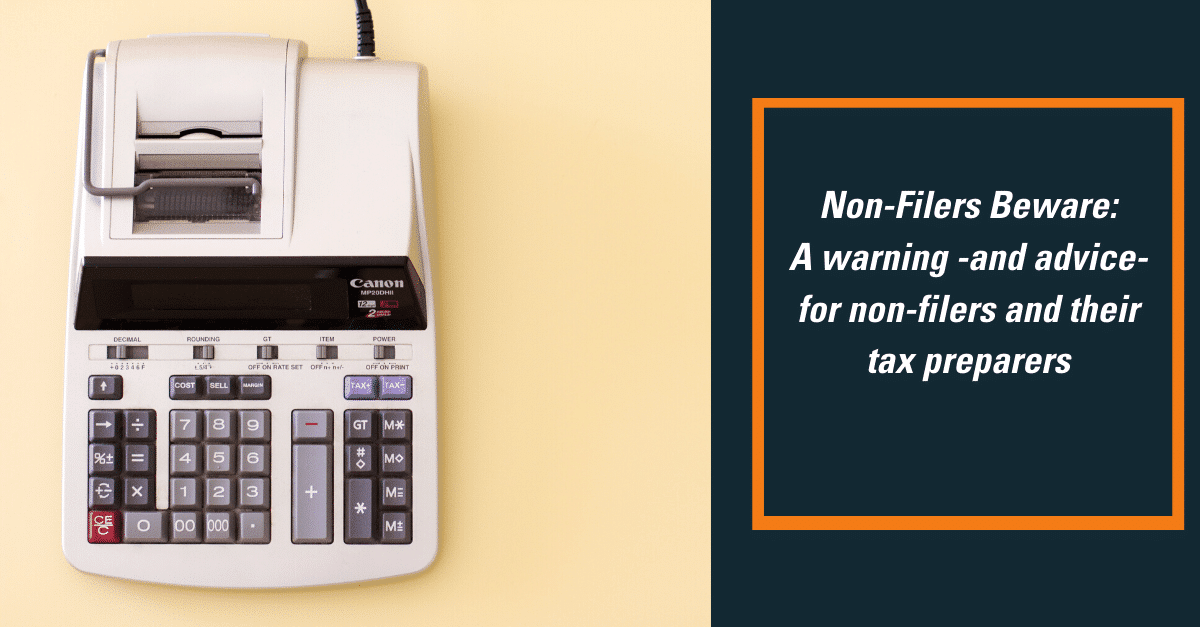 The IRS recently announced a renewed focus on non-filers by way of Information Release 2020-34 and Fact Sheet 2020-2. Both were issued on February 19, 2020 and warn of the IRS increasing face-to-face visits with high-income taxpayers who have not filed tax returns in 2018 or previous years. The IRS has hired additional enforcement personnel to bring these taxpayers into compliance. A typical targeted non-filer has already received numerous letters from the IRS, so he or she would be keenly aware there is a problem. The government separately advised that taxpayers with delinquent filing or payment obligations should consult a competent tax advisor and not wait to be contacted by a revenue officer.

But what does this mean for that competent tax advisor?

Well, let’s say you’re an Enrolled Agent and one of these non-filers walks into your office. As with any client, make sure you have a clear retainer agreement as to the services you will provide. Include the specific years you will be preparing for 1040s and any state/local returns. Understand that often these clients are undergoing personal or professional issues which may have contributed to non-compliance. Be compassionate and take notes as to specific ailments or other conditions and circumstances which could help you attempt to abate penalties and maybe even interest later. If the client has already been contacted by a revenue officer, immediately contact that officer and let him or her know which returns you’ll be preparing, and if applicable, whether you have been retained to represent taxpayer in reference to collection. Perhaps an offer in compromise will be forthcoming. Let the agent know the dates by which returns will be filed. Revenue officers appreciate the roadmap to compliance, and providing it, and following it, will go a long way to establishing a better working relationship with the IRS.

I had a client who I’d see every few years with this sort of issue. He was a long-haul truck driver. He reported his income on Schedule C, as I suspect many of these taxpayers soon-to-be-visited by IRS do as well. His net income after expenses usually resulted in a $0 balance due, but he still should have been filing returns all along because his gross 1099s totaled above the threshold. By the way, for 2019, they’re $12,200 for Single, $24,400 for Married Filing Jointly, and $18,350 for Head of Household. Those 65 and older have slightly higher thresholds, but remember the IRS requires married individuals filing separately to file a return if their gross income is $5, regardless of age. The thresholds are based on gross income.

The IRS, then, would have no information on his expenses absent his return filing and would look for a return each year due to filed 1099s. He incorrectly assumed owing nothing each year excused his 1040 filing, even though his gross income mandated a return. This needlessly subjected him to possible forfeiture of his semi because the IRS would have been well within its powers to seize the truck. And then he would have been left without any ability to make a living.

Non-filers are often completely unaware of these residual collection issues which may arise and make their situations much more difficult to resolve. Encourage them to promptly file and pay to avoid these further complications. As such, I hope this article will help you in dealing with this renewed and targeted enforcement area.

Nick Spoltore is VP of Tax & Advisory Content for Surgent CPE. Mr. Spoltore is a graduate of the University of Notre Dame and of Delaware Law School. Before joining Surgent, he practiced tax and business law at the firm of Heaney, Kilcoyne in Pennsylvania and also in Delaware.